THESE 25 BLACK-OWNED RESTAURANTS ARE REDEFINING VEGAN FOOD
From Ethiopian wots in Los Angeles to crab-cake sliders in New York, these plant-based hotspots are proving that vegan food isn’t just about quinoa salads and grilled tofu.
by NICOLE AXWORTHY
Source: VegNews.com

The culinary scene in communities of color is inherently vibrant, undoubtedly distinct, and unapologetically Afrocentric. And now that this sector of the population is reducing its consumption of animals faster than any other demographic, a new generation of leaders and entrepreneurs are coming out of the woodwork to help spread the plant-based love with their communities and beyond—accentuated with that same cherished ethnic flare. Join us as we eat our way across the country on a soul-food and health-food tour, starting with these 25 Black-owned vegan restaurants. 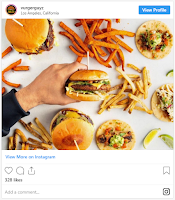 Specializing in vegan comfort food that can be delivered right to your door, Compton Vegan founder Lemel Durrah allows his customers to dig into creamy vegan Buffalo chicken mac and cheese drizzled with housemade ranch, or succulent BBQ jackfruit ribs served with mac and cheese, baked beans, collard greens, and cornbread—without leaving the comforts of their own home.

3. Divine Dips (Los Angeles)
This beloved vegan ice cream brand has been around for years, selling pints in stores and dishing out scoops from a truck. In 2018, owner Diane Jacobs opened her own shop in the heart of downtown LA, offering more than 15 flavors ranging from matcha green tea to black sesame ginger, along with non-dairy milkshakes, ChurroNuts (a churro/doughnut hybrid), and other baked goods.

4. Azla (Los Angeles)
Founded by a mother-daughter duo in a food hall near the University of Southern California, Azla specializes in mix-and-match meals consisting of authentic Ethiopian wots, salads, and injera, allowing local students to grab affordable vegan grub in between classes.

5. Souley Vegan (Oakland, CA)
Chef Tamearra Dyson has been cooking up vegan soul food since she was 18 years old. With Souley Vegan, she continues to impress locals with her Southern-inspired meals such as New Orleans okra gumbo with grits, Jambalaya with house-made seitan, and seitan shrimp po’ boys.

7. Judahlicious (San Francisco, CA)
This plant-based spot offers a wholesome menu packed with classic green juices, wheatgrass, and acai bowls, along with dishes such as pancakes, the excellently named “No Shirt, No Shoes” rice bowl, and raw meals such as the Dahnu Wrap with almond pâté and marinated kale. 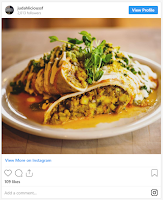 A fast-casual restaurant created by Nigerian owner Akindele Bankole, Veg on the Edge might just be the only vegan, gluten-free, and kosher West African restaurant in the world. Bankole takes traditionally meat-heavy West African eats and subs in mushrooms, beans, and tofu instead to create truly hearty vegan meals.

12. The New Vegan (Palm Beach, FL)
Home of the famous falafel burger, The New Vegan is owned by Patricia and Rahein Jones—the first cousin of musician Corey Jones who was killed by police officer Nouman Raja in 2015. With another location in Delray Beach, the family serves health-giving but hearty dishes such as hearts of palm-based tuna sandwiches, zucchini fettuccine, and ice cream-topped brownies.

14. The Southern V (Nashville, TN)
Run by husband-and-wife team Clifton and Tiffany Hancock, The Southern V serves up Southern favorites vegan-style, such as crispy fried chicken, chicken and waffles, and silky mac and cheese—with the aim of making vegan food accessible to all.

15. Veltree (Charlotte, NC)
This women-owned vegan soul-food cafe offers exclusively vegan Southern food—think fried chicken drumsticks (that even celebrities rave about), mac and cheese, cornbread, and yams. Plus, they host open mic nights for local artists in an effort to create a communal place where everyone feels welcome.

17. NuVegan Cafe (Washington, DC)
Founded by Vernon and Lynn Woodland, NuVegan has four locations in DC, Maryland, and Virginia. With an aim to make vegan food appealing to everyone, the Woodlands craft creative takes on fried chicken sandwiches and cheeseburgers while also serving up healthy sides such as herbed quinoa and ginger-spiced tofu in their cafeteria-style cafe.

18. The Land of Kush (Baltimore, MD)
Named after an ancient African civilization, this longtime all-vegan spot feeds your spirit with soul-food classics such as black-eyed pea fritters, crab cakes, and carrot tuna.

20. Belmont Vegetarian (Worcester, MA)
This popular takeout spot specializes in a “soulful Belmont twist on Jamaican and American inspired dishes” with robust plant-based entrées such as vegan BBQ chicken and lamb, plus hit-the-spot pasta dishes such as mac and cheese and spaghetti with meatballs. 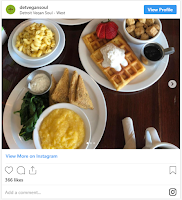 22. Urban Vegan Kitchen (New York)
Co-owned by Pamela Elizabeth of New York’s Blossom restaurants, this part restaurant, part lounge celebrates the flavors of the American South with fried okra and hush puppies alongside American classics such as burgers and BLTs.

23. Juices For Life (New York)
Founded by rapper Styles P of The Lox, Juices For Life caters to both the hip and health-conscious with its fresh-pressed juices and smoothies. With four locations across New York, the franchise is using its hip-hop swag to create awareness of plant-based living within communities of color. 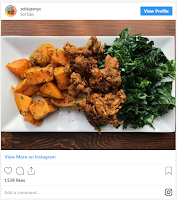 Nicole Axworthy is the News Editor of VegNews and author of DIY Vegan who adores vegan soul food but will politely decline anything with okra.